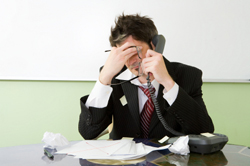 We all like to think that we would have the courage to stand up if we witnessed or were the victim of discrimination in the workplace, or if we knew that our employer was engaged in illegal activities that put coworkers or the public at risk. Unfortunately, however, the pressures imposed by corporate culture and the need for job security are difficult to comprehend for those who have never had to make the choice between standing up for what's right or turning a blind eye and quietly continuing to work. Lawmakers in Congress and in New York long ago realized the tremendous pressure employers can put upon their employees to remain silent. As a result, lawmakers legislated protections to prevent retaliation against those who report discrimination and malfeasance. Our attorneys at Joseph & Kirschenbaum LLP understand these protections and can fight for whistleblowers who experienced retaliation.

There are numerous federal and state laws that prohibit retaliation against employees who report unlawful conduct, cooperate with regulatory authorities or otherwise exercise their legal rights. However, the scope of these protections and the actions required to utilize them depend greatly on the circumstances:

Making the decision to become a whistleblower is never easy. However, having experienced legal counsel by your side can allow whistleblowers to move forward with confidence. Our legal team at Joseph & Kirschenbaum LLP has fought for whistleblowers and victims of retaliation in all industries—from Wall Street board rooms to New York City restaurant kitchens. If you are thinking about stepping forward as a whistleblower, or have already done so and are suffering or fear suffering retaliation from your employer, contact us today at 212-688-5640 or reach out to us online. Se habla espanol.

Employment Lawyer Blog - Whistleblowers
Practice Areas
Search
Client Reviews
★★★★★
"Just wanted to let you guys know that things have changed alot since the winning of our case against my employer. About 2 months ago, I was chosen to become one of the shift supervisors for security. It was an honor to be given this position, and a privilege to be the 1st female shift supervisor to ever to take on such a position." T.C.
★★★★★
"Thank you very much for representing me in my case against my former employer. You and your staff are excellent representatives, and I never thought I would have so much personal attention from a law firm. Again, thank you for helping me move on with my life." L.H.
★★★★★
"I would like to thank Joseph & Kirschenbaum LLP for all the services your firm provided for me in my time of need. You helped me through difficult and emotional times with understanding and great talent. I can't thank you enough for helping me get more of a settlement than I ever thought I could get." A.K.
★★★★★
"Thank you for your hard work and wonderful service in helping me win my claim. It was because of your help that I received a favorable decision. I'll recommend your services to anyone I know who needs help!" A.C.
★★★★★
"Everyone at your firm was so helpful and positive about my situation, I was immediately relieved to know I was not alone in my fight. And I could not be happier with the results." L.I.
View More
Submit a Law Firm Client Review