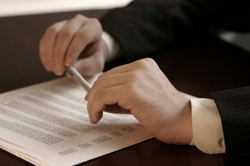 Retaliation is the name for any actions an employer takes against you for asserting your rights under federal and state employment laws. Retaliation is prohibited by Title VII of the Civil Rights Act as well as the Americans with Disabilities Act, the Equal Pay Act and the Age Discrimination in Employment Act. It is likely also prohibited by anti-discrimination laws in your state; for more information, see our page of information by state under State Agencies. For information on which employers are covered by these laws, please see our pages for the specific type of discrimination at issue.

Retaliation could be any "adverse action" taken to discourage you from reporting discrimination, asserting your legal rights (such as requesting time off to care for a sick spouse), supporting another person's report of discrimination or participating in anti-discrimination proceedings. In some states, you are also protected from retaliation for refusing to participate in activities you believe are illegal discrimination. Retaliation laws apply even when you are being retaliated against for an action you took with a previous employer or with a union. They also apply when you support another employee's discrimination complaint, even if the discrimination didn't apply to you.

One of the clearest forms of retaliation is firing an employee for reporting discrimination. Examples of other adverse actions include:

Negative actions against "whistle-blowers" who report illegal conduct by their employers are a type of retaliation. But when the illegal conduct is not discrimination, these employees are covered by a separate set of whistle-blower laws. You can find more information on our page on Whistleblower & Sarbanes Oxley Claims.

In order to prove that you have been retaliated against, you must be able to show that the adverse action against you resulted from your participation in an activity protected by the law. This can be difficult if the employer is savvy enough to make up another reason for the adverse action against you. The best way to know for sure whether you have a case is to speak to an experienced employment discrimination lawyer. However, you may be able to build a strong case if you can show that:

If you believe you have been retaliated against on the job, you should speak with an experienced employment discrimination attorney as soon as possible. Retaliation and anti-discrimination claims have extremely tight time limits that, if missed, can eliminate your ability to claim legal relief. The lawyers at Joseph & Kirschenbaum LLP are committed advocates of employee rights with years of experience handling retaliation and discrimination claims in New York and around the nation. Contact us to tell us about your case and learn more about your options.

Employment Lawyer Blog - Retaliation
Practice Areas
Search
Client Reviews
★★★★★
"Just wanted to let you guys know that things have changed alot since the winning of our case against my employer. About 2 months ago, I was chosen to become one of the shift supervisors for security. It was an honor to be given this position, and a privilege to be the 1st female shift supervisor to ever to take on such a position." T.C.
★★★★★
"Thank you very much for representing me in my case against my former employer. You and your staff are excellent representatives, and I never thought I would have so much personal attention from a law firm. Again, thank you for helping me move on with my life." L.H.
★★★★★
"I would like to thank Joseph & Kirschenbaum LLP for all the services your firm provided for me in my time of need. You helped me through difficult and emotional times with understanding and great talent. I can't thank you enough for helping me get more of a settlement than I ever thought I could get." A.K.
★★★★★
"Thank you for your hard work and wonderful service in helping me win my claim. It was because of your help that I received a favorable decision. I'll recommend your services to anyone I know who needs help!" A.C.
★★★★★
"Everyone at your firm was so helpful and positive about my situation, I was immediately relieved to know I was not alone in my fight. And I could not be happier with the results." L.I.
View More
Submit a Law Firm Client Review